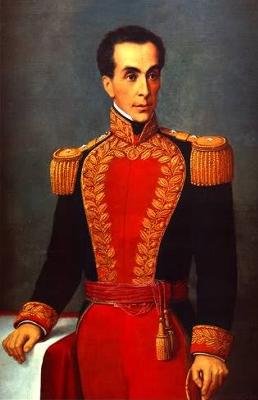 Simon Bolivar was one of South America's greatest generals. His victories over the Spaniards won independence for Bolivia, Panama, Colombia, Ecuador, Peru, and Venezuela. He is called El Liberator (The Liberator) and the "George Washington of South America."

Bolivar was born in July 24, 1783, at Caracas, Venezuela. His parents died when he was a child and he inherited a fortune. As a young man, he traveled in Europe.

The Spaniards forced Bolivar to retreat from Venezuela to New Granada (now Colombia), also at war with Spain. He took command of a Colombian force and captured Bogota in 1814. The patriots, however, lacked men and supplies, and new defeats led Bolivar to flee to Jamaica. In Haiti he gathered a force that landed in Venezuela in 1816, and took Angostra (now Ciudad Bolivar). He also became dictator there.

Bolivar marched into New Granada in 1819. He defeated the Spaniards in Boyar in 1819, liberating the territory of Colombia. He then returned to Angostura and led the congress that organized the original republic of Colombia (now Ecuador, Colombia, Panama, and Venezuela). Bolivar became its first president on December 17, 1819.

Bolivar crushed the Spanish army at Carabobo in Venezuela on June 24, 1821. Next, he marched into Ecuador and added that territory to the new Colombian republic. After a meeting in 1822 with another great liberator, Bolivar became dictator of Peru. His army won a victory over the Spaniards at Ayacucho in 1824, which needed Spanish power in South America. Upper Peru became a separate state, named Bolivia in Bolivar's honor, in 1825. The constitution, which he drew up for Bolivia, is one of his most important political pronouncements.

Return to our famous people from Bolivia home page.

Add your own article about a famous person from Bolivia.