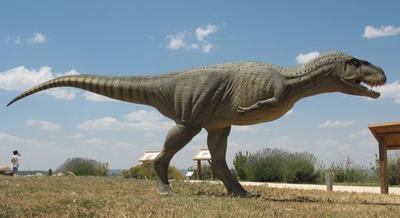 The abelisaurus was a dinosaur that lived in the middle of the Cretaceous Period 80-85 million years ago. It lived in Bolivia and Argentina. The name is Greek for Abel's lizard because its remains wee discovered by Roberto Abel.


Scientists think that the abelisaurus was about 30 feet long and probably weighed about 2 tons. It is also believed that it was related to the famous tyrannosaurus rex and, like rex, it had short arms which were most likely fairly useless. It was also a carnivore and a theropod.

Scientists have suggested that the abelisaurus rivaled other carnivores in the area like the carnotaurus and the mighty gigantosaurus. For some reason, this dinosaur had long holes on the right side of its skull. We don't know why these holes present, but scientists suggest that it might have been caused by the process of evolution. It was a plant eating dinosaur.