Does Bolivia have a national mineral or gem? 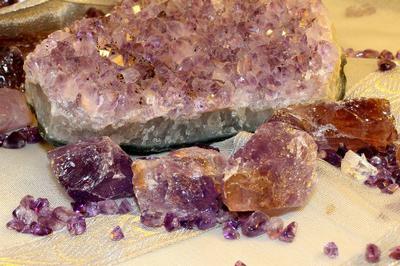 Bolivia hasn't really selected a mineral or gem as it's official national gem symbol or official national mineral symbol BUT... there is a gem that is completely unique to Bolivia and has never been found anywhere else in the world.


It's called "bolivianita" (in English, "bolivianite") and is actually a combination of "amethyst" and "citrine" and if Bolivia were to name a gem as an official national symbol at some point, there is no doubt in my mind they would most likely chose bolivianita. Here's why:

Amethyst is a purple gem and citrine is a yellow/gold gem. Separately they can be found in many places. But in Bolivia, in a single mine called the Anahí Mine, they have been found in a "fused" state. This is so rare, and so unusual that, of course, local native inhabitants, have a legend to tell (and its a sad and beautiful legend). Click here to read the Legend of Anahí.

Bolivianita gems and jewelry are now being exported and sold all over the world. The legend involves a native princess called Anahí and she is tied to the origins of the world's only bolivianita mine.

As to an official mineral, Bolivia is, historically, known for its silver (and consequently tin) mines. In fact, silver and tin have had a huge role in shaping and influencing much of Bolivian history from the colonial era through the present. If a mineral were to be chosen as an official national symbol, silver might be it. However, both silver and tin also related to some very sad and negative points in Bolivia's history, so I'm not so sure.

Perhaps Bolivians would rather choose one that brings them hope. In that case, Bolivians are currently pinning their hopes for a brighter future on lithium, a mineral that is used in long-use or recyclable batteries, car batteries and cellphone batteries (so can you imagine the size of the world market for lithium?) One of the world's largest lithium deposits has been found underneath all the salt in the Uyuni Salt Flats. The problem is, Uyuni is one of Bolivia's top tourist destinations. Lithium is also used in some very important medications that are used to treat the brain.

In Bolivia you'll also find copper, gold, zinc, sulphur, bismuth, lead, antimony, and tungsten, among others. It's also a leading oil and gas country in South America and Bolivia is also home to the world's largest iron ore mine.