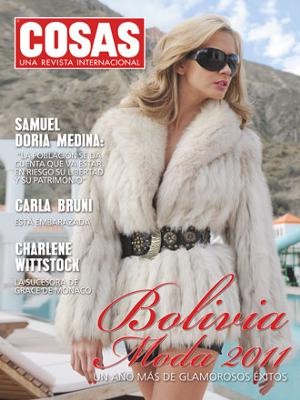 One annoying aspect of the few really cold days we’ve had in the last two “winters” is that, by being truly unpleasant, they have curtailed enjoyment of what normally is a brief, rather pleasant change of climate that allows the women of Santa Cruz to be body conscious in whole new ways.


Typically a “!Que frio!” day in Santa Cruz is one that, in the higher latitudes where it sometimes actually freezes, would be regarded as only moderately cool. The kind of a day when you dig out a windbreaker and think that winter is on the way -- but has definitely not yet arrived.

The reaction in Santa Cruz is something that more closely resembles panic. I remember when teaching during my first “winter” here being somewhat amazed at how over-bundled up my students were on the first somewhat crisp morning. There they were in their places with ski caps, scarves, parkas, and heavy boots, some clutching their pencils tenuously in trembling mittened hands.

My immediate impression is that I had somehow been miraculously transported to a ski resort ski school, where an intermediate snowboarding class was preparing to watch a video entitled “Moguls Are Your Friend” prior to hitting the slopes.

I understand that the cold hits harder here in sun-drenched, zephyr-swept Santa Cruz because everyone has had their blood thinned by the hotter temperatures that they customarily bask in. And because it comes so suddenly the cold weather is more of a shock than it is in, say, Bismarck, North Dakota, where the change, while more severe and prolonged, is relatively gradual.

Consider that the coldest day this year so far was July 21, when the temperature skidded down to 54 degrees Fahrenheit (12 Celsius). It no doubt felt colder because the day before it had been 86 F (30 C).

Still, as I was saying, the cool weather, in moderation, functions mainly as a trigger for a fashion parade by the women of Santa Cruz. We are, admittedly, going to be paying more attention to women’s fashion than men’, since the latter often seems to be a contradiction in terms here. I have witnessed occasions when the phrase “dress formal” has been taken by men to mean “clean T-shirt.”

For women, in contrast, no opportunity to dress up is ever missed. And for them cool weather means an chance to break free of their customary uniform of sleeveless top, tight slacks and spiked heels -- and break out their sweaters.

Even though there are only about fifteen days a year when they can wear them, every Cruceña seems to own several terrific sweaters, which they put on as soon as there’s a slight nip in the air, which is to say as soon as the mercury plummets into the 70s F (or below 27 C).

And these are not rumpled old sweaters such as one might rescue from the back hook of the closet. These are high fashion knits in all manner of styles – rib, cable, stripes, solids, crew-necked, turtle-necked, zippered, belted, or lattice-fronted -- all knitted from intricate blends of natural fibers and Lycra Spandex.

Just as interesting as what women are actually wearing is what the various fashion authorities are suggesting that they should be wearing in the inevitable spate of “winter fashion” magazine spreads. It’s always fun to look at the photos and play, “What’s wrong with this picture?"

Consider the cover of a recent issue of Cosas heralding its “Bolivia Moda 2011” issue, which shows a striking blonde model wearing a white “fun fur” jacket belted at the waist, and open to the belly button, presumably still leaving her vulnerable to icy south-bound blasts.

She actually appears to be wearing nothing else on top (aside from sunglasses), but down below she’s got on what looks like a sturdy pair of . . .yes, you guessed it . . . short shorts.

One can’t help but think that if she were actually to wear this outfit in a place where it was authentically cold she would run a severe risk of what weathermen in North America often refer to as “frost on her pumpkins.”

Another favorite of mine (from Ellas, the El Deber supplement) has a model wearing a leather helmet that makes her look like a 1920s American football player (or perhaps a World War I aviatrix). A silk scarf is dramatically swirled around her neck, and a well tailored leather jacket covers her all the way down to her . . . mini skirt.

If it’s any comfort to those who genuinely suffer from the cold, we should be close to the end of the chilly season. July statistically is Santa Cruz’s coolest month. (Average low temperature: 59 F, 15 C.) In August the average low moves up substantially.

Meanwhile, remember to button up.

If you accessed this article from our August 2011 issue of Bella News, return to reading the issue here.