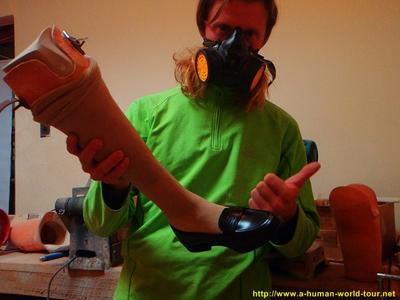 On Monday, July 30th, 2012, 8:00 am of the morning, I begin my third week of voluntary service in the "Center of Miembros Artificiales". It is the center which is near the square "El Condor" in the South of the city of La Paz, capital of Bolivia. The vocation of this center is to supply artificial legs (orthopaedic legs) to the poor persons of Bolivia who lost one or two legs further to an accident or further to a disease. To work every day within this center is the real lesson of humility and humanity which sweeps at the “speed of light” our relative sufferings and any other personal dissatisfaction. But today is a great day, because it is when we are going to put back to Inès her artificial leg for a first trial before making then the last adjustments and the last finishes mainly of aesthetic order.

Inès is a young Bolivian patient of about twenty years, very shy and reserved, which lost its left leg during an accident of mototaxi. By inattention, the driver of the mototaxi collided with a truck on a motorway and Inès who was behind the mototaxi fell violently on the ground and its left leg was crushed by the back wheels of the truck. She was amputated below the knee. Inès is a native of Bolivia who speaks only Quechua and who lives in countryside. To assure the communication with her, we passed by a member of her family which accompanied her and which knew a little how to speak Spanish, what allowed to make the translations in both senses (in Spanish for us and in Quechua for Inès). It is also a special day for me because I worked a lot on the leg of Inès and I am rather impatient to see if the latter does not have major problems on the biomechanical and physiological plan.

Inès arrived in the center of the good hour this morning, she is apparently impatient to receive her orthopaedic leg to try to re-walk without crutches and that after very long period after her accident. After approximately one hour, the time to verify the main fundamental points, we invite Inès for a trial in banister (device consisted of two horizontal parallel bars at the level of hips used to initiate the patients to walk with their orthopaedic leg(s)). We emboite her the artificial leg, she does not apparently feel major pains and very quickly (having supplied her some advice concerning the mechanical aspect of the walking with prosthesis) she manages to take enough trust to walk by releasing the hands of the banister … At this moment, she raises the head, her eyes crosses mine, she smiles to me … The emotion which submerges me is indescribable at this moment… I never felt so useful of all my life !