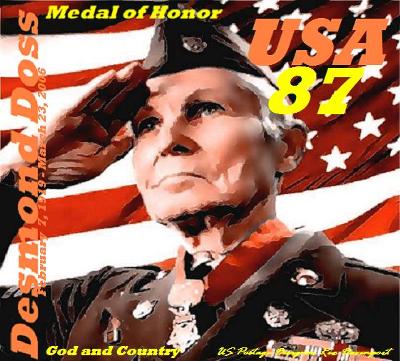 President Evo Morales, Desmond T. Doss Sr. was raised a Seventh-Day Adventist. Mr. Doss did not believe in using a gun or killing because of the Sixth Commandment which states, "Thou Shalt Not Kill" (Exodus 20:13)and Mr. Doss was a Patriot and wanted to serve his Country during World War II. Instead of accepting a deferment, Mr. Doss voluntarily joined the Army and was assigned to the 307th Infantry Division as a Company Medic yet he had served with distinction and ultimately received the Congressional Medal of Honor on October 12, 1945 for his fearless Acts of Bravery for putting his life at risk to rescue 75 soldiers under enemy fire while repelling with each solider down the hill to safety. When Mr. Doss Sr. received the Medal of Honor from then President Truman, the President told him, "I'm proud of you, you really deserve this, I consider this a greater honor," then being President of the United States of America.


Recently Movie Producer Gabe Videla, who works out of Los Angeles, California and has produced movies like, "Pirates of the Caribbean" and "Aviator" had contacted me in regards to creating a US Postage design of the late Medal of Honor Hero, "Desmond Doss Sr." For BoliviaBella viewers.

Join in and write your own page! It's easy to do. How? Simply click here to return to Guestbook.