UN criticizes destruction of forests in Bolivia, asks for "down to earth" policies 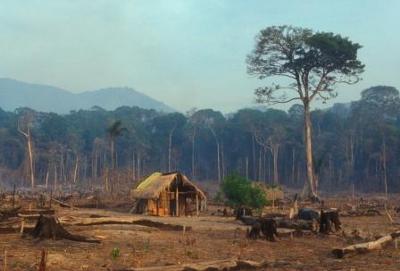 UN criticizes destruction of forests in Bolivia, at a rate of 300,000 hectares per year, and asks government to bring its policies "down to earth". El Deber - 13 May 2011: The UN expressed concern today because each year 300,000 hectares of forest are destroyed in Bolivia, and asked the Government, which tends to present itself as an ecological leader, to "bring policies down to earth" and take concrete actions against climate change.


Yorico Yasukawa, UN representative in Bolivia, made the request when presenting a study titled "Tras las Huellas del Cambio Climático en Bolivia" (a report on climate change in Bolivia), which gathered data and experiences on problems involving the climate, water and food security.

"Although Bolivia is not one of the larger guilty parties in terms of global warming, we don't believe it has sufficiently supported the reduction of emissions, taking into account that every year 300,000 hectares of forest are destroyed in Bolivia," said Yasukawa.

She highlighted "the efforts by the Bolivian State to give political priority and protagonism to the need to protect Mother Earth and combat climate change in instruments as important as the Constitution"... "but now these have be brought down to earth in the form of concrete strategies and actions," she added.

"Much of the deforestation in Bolivia is caused each year by farmers who burn thousands of hectares to expand or clear land for cultivation, especially in the Amazon region, causing uncontrollable fires using a practice called chaqueo" (slash and burn farming), which President Evo Morales has defended as a "natural phenomenon" and a deep-rooted custom.

In 2010 intentional forest fires destroyed a quarter of a million hectares, generating multi-million dollar economic losses and the evacuation of several towns.

Yasukawa insisted that climate change is an urgent problem, which must be faced in Bolivia as elsewhere in the world, and advocated taking both "scientific" evidence and indigenous ancestral knowledge into account in political policies.

She added that calculations show that by 2080 temperatures could rise between 1.8 and 4.5 degrees Celsius in South America, which would cause economic losses of around 30 billion dollars.

Morales has criticized the climate chage agreements reached as the Copenhagen and Cancún climate summits, stating he believes they are insufficient to protect the environment. However he also faces criticism from some indigenous groups who reproach the destruction of the natural environment for highways and development projects.

During the Cancun climate summit the government took the position that Mother Earth is a divinity subject to rights, and (Bolivia) was the only one of 193 countries to do so.

Join in and write your own page! It's easy to do. How? Simply click here to return to Environment.