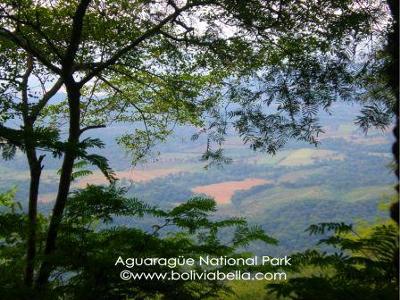 Deep in southern Bolivia, bordering Argentina, is one of the prettiest regions in the country: Tarija. In addition to the many tourist attractions in and around the city of Tarija, Bolivia's second smallest department is home to some incredibly beautiful natural regions, reserves, parks and landscapes.


1. ALTIPLANO TARIJEÑO (THE HIGHLANDS OF TARIJA)

The highlands of Tarija are located in the municipalities of Yunchará and El Puente, and are part of the "Cordillera de Sama" (Sama Mountain Range) Biological Reserve. This area has wetlands of international importance, formed by 4 lagoons which are home to over 30 species of highland aquatic birds, an enormous cactus forest, sand dunes, a true cold-climate desert, a quewiña (Polylepis tomentella Weddell) forest, and the San Juan del Oro River.

Millions of years ago the Central Valley of Tarija and its surroundings were covered by a great lake; however, near the beginning of the Quaternary period, an earthquake caused numerous changes in the landscape. It is believed that one of these is a fissure now known as the Angostura Canyon, through which the lake flowed out, emptying into the now fertile valley of Tarija.

Also called the Cordillera del Pabellón, this valley is located in the Municipality of Padcaya. It is an intermediate storey between the Andean highlands and the subtropical jungle extending over 25 kilometers in length. The Valley of the Condors is found in this beautiful place, known as such because some of the largest colonies of condors in the world inhabit this natural sanctuary.

The "Bolivian Tucumana" type jungle, also called the "Tucumana Jungle" has very particular features of singular beauty. Expanding over the Tariquía and Alarachi reserves, the gorgeous sub-Andean valley of the province of O'Connor, and the Bermejo triangle, this region is blessed by nature and offers a great many spectacular natural attractions.

The Aguaragüe mountain range is part mountainous jungle and part humid Chaco, a transition ecosystem with immense water sources that feed into the Bolivian Chaco region. The existence of a large variety of little-known flora and fauna make this region an important referent of the country's biodiversity heritage.

The Chaco region of Tarija is a dry tropical forest region classified as the second most important ecosystem in South America, after the Amazon. It is formed by both low and high forests, natural prairies, and bodies of water, and is home to important species of fauna, especially songbirds, which delight visitors to this region.

Join in and write your own page! It's easy to do. How? Simply click here to return to Tarija.