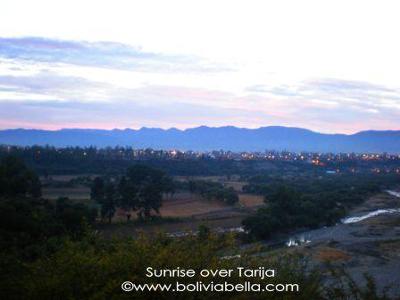 Although it is the second smallest of Bolivia's nine departments (states), Tarija has a surprising variety of geographical, topographical, and climatological zones. Read more about the four main regions of Tarija, Bolivia.

The Andean Zone of Tarija is located between 2300 and 4600 masl. It is a region of high mountains, foothills and inter-Andean plains with a cold, arid climate. From an ecological point of view, this is a region of singular landscapes, with a beauty typical of highland ecosystems. The Sama Biological Reserve with its wetlands and saltwater lagoons is found here, along with a great variety of fauna, such as cranes, seagulls, and ducks, as well as llamas, vicuñas and sheep. In this region you will find beautiful artisanal weavings made from natural animal fiber in impressive colors. Places to visit: Camino del Inca (an ancient Incan footpath) and Laguna Grande Tajzara (the Great Tajzara Lagoon).

The city of Tarija and numerous smaller towns and villages can be found in this zone, all privileged to be located in a sub-tropical valley between 1200 and 2000 masl. Here the climate is benign. The hospitality and friendliness of Tarija?s people are among the greatest attractions of this region, which is also home to impressive beauty, ecological wealth, sports facilities, and places of religious, historical, scientific and paleontological interest. In addition, the great number of local festivities, agricultural fairs and cultural and folkloric activities make the Central Valley a tourist attraction of great potential. Click here to see a list of places to visit in the Central Valley.

The Chaco Region, which includes the towns of Caraparí, Villamontes and Yacuiba, among others, you?ll enjoy a tropical climate with high temperatures during the summer and a cooler climate in the winter. The Aguaragüe Mountain Range (also a national park and protected area) runs from North to South, delimiting this entire region to the East. The landscape in this area, its wealth of flora and fauna make this an ideal location for ecological and conservation tourism. Places to visit: the Pilcomayo River

This region is located between 560 and 2600 masl. It has a humid, temperate climate and borders the Republic of Argentina to the South. Along the border the region has a great variety of vegetation, flora and fauna. Climactic conditions are very interesting because there are both hot and humid zones, and hot and arid zones. This zone is bordered to the North by the department of Chuquisaca and to the South by the province of Salta, Argentina. Places to visit: Chorro de Narvaez, the Tarija River).

Join in and write your own page! It's easy to do. How? Simply click here to return to Tarija.