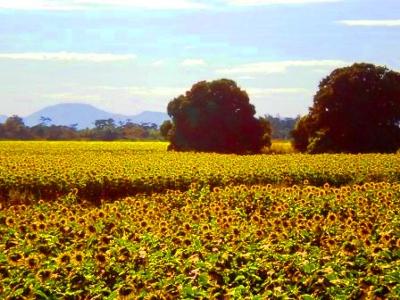 Of the 2.86 million hectares of cropland in the country, 1.85 million are in Santa Cruz. Food production in Santa Cruz is valued at over $1.3 billion dollars. The department of Santa Cruz dominates agricultural production in the country with 1.85 million cultivated hectares, or 64% of the 2.86 million hectares of cropland that exist in Bolivia, according to official reports.

Nationally vegetable oil and 9 other food production industries occupy 1.28 million hectares of land (1.4 million in Santa Cruz) equivalent to 44.9% of the total, according to a National Agricultural Survey (ENA) done in 2008 and revealed this week by the Bolivian National Statistics Institute (INE).

Soy stands out at 835 thousand hectares, although sugar cane yields 7.4 million tons of sugar at an average of 49,000 kilograms per hectare, according to this survey. Almost all of these crops are in Santa Cruz.

Sugar cane yield has practically doubled in the past year and now stands at 70 tons per hectare, stated Mariano Aguilera, of the Guabirá Sugar Company. Perspectives for increasing the cultivated area, production and yield are even greater this year, although there is a fuel shortage that causes fear among sugar can growers in Northern Santa Cruz.

The image that is projected overseas through mass media can either benefit or damage Bolivia's "country brand", stated one speaker on Marketing Day.

For Bolivia in particular to be identified exclusively as an Andean country is harmful when attempting to create a brand for the country, noted Marcelo Rainuzzo, of the Interbrand consulting company, during his speech on Marketing Day.

A "country brand" is a logo and/or slogan used by countries to "sell" their image just as is done for companies, products or services.

"It's important for Santa Cruz to have its own departmental image, not necessarily in political terms, but an image as a department, as it is the economic center of the country to which the economic sectors of each department is attached" added Fernando Gamarra, Marketing Manager for the Banco Ganadero, who made a presentation on this bank's experience with renewing its image.

How is a country brand created? Gamarra states a joint international relations effort must be made that involves the ministries of the economic areas "but above all, as a starting point, a common position must be held, and our topmost authorities must lead this".

This is a translation of portions of an article that appears in the newspaper "El Día" on Sunday 25 April 2010. You can read the full article in Spanish here:

Join in and write your own page! It's easy to do. How? Simply click here to return to Santa Cruz.