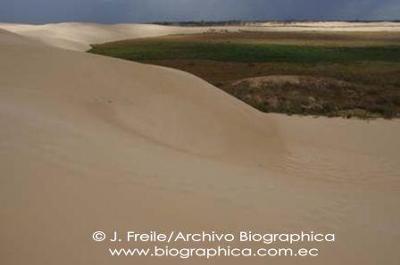 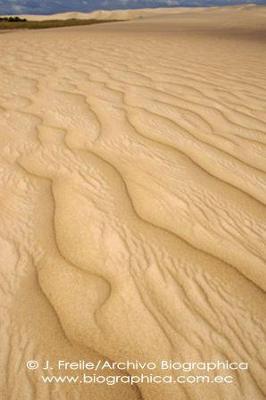 The Lomas de Arena (Sand Dunes) are one of most unusual attractions you’ll find in Santa Cruz, Bolivia. Located just outside the city of Santa Cruz de la Sierra in the lush Bolivian tropics, arid sand dunes are about the last thing you’d expect to find. The Lomas de Arena have been declared a “Natural Integrated Management Area” (a 13,454 Km2 protected natural habitat) and are one of the most frequently visited attractions in the area.


The sand dunes shift and travel continuously, between 20 and 40 meters per year in a North-South direction fed by sands from the nearby Piraí River. Here you’ll find tranquility and some very unusual birds and animals including storks, armadillos, owls and the occasional emu. These are just some of the nearly 200 species of fauna that may be seen at the dunes at different times of the year. Many of them are migratory species that rest in the area during migration. In addition, there are numerous unique species of flora.

One of the attractions at the Lomas de Arena is a lagoon which is at its largest after the rainy November-April season. At times, after an especially dry spell, there may be no lagoon at all.

Although the sand dunes are just 17 kilometers from the city, you should be aware that the last part of the road is rather rough and there is very little tourist infrastructure. There are very few shady areas; therefore, you should take snacks and plenty of water along with sun block, a hat and possibly insect repellent, depending on the humidity at the time you visit.

Although camping is allowed in the area, you must bring all your own equipment. As it is a protected natural area, hunting, fishing and fires are prohibited and you must respect nature and keep the area clean. What you pack in you must pack out, including any trash you generate while you are there. There is an entry fee to the park (equivalent to about 50 cents of a dollar per person).

Join in and write your own page! It's easy to do. How? Simply click here to return to Tourism.