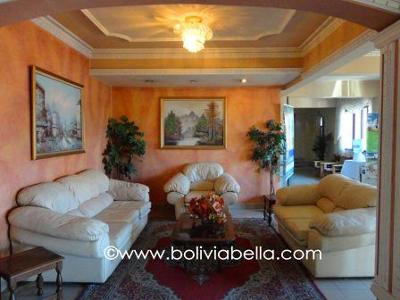 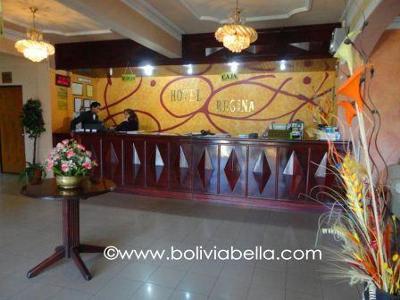 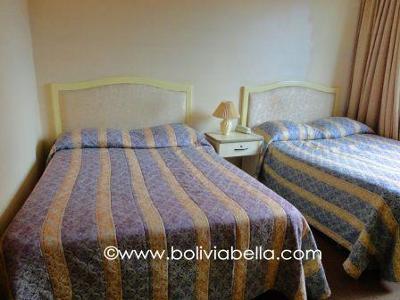 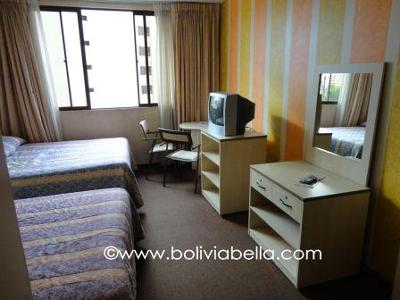 The hotel is small and not fancy. The rooms are simple and clean, equipped with WIFI and Cable TV. However, if you plan to use your computer you should be aware that the rooms have absolutely no plugs. The only plug is a single outlet located behind the television, and the TV is plugged into it, so you have can't watch TV and work on the computer or plug in anything else at the same time. The only other plug is in the bathroom, which I was obligated to use to recharge cameras, phone and laptop.

If you walk through the hotel hallways and general public areas, you'll notice the hotel needs maintenance. A light fixture hanging from the ceiling in the 5th floor hallway showed evidence of having been on fire, as the ceiling was still blackened. That was a bit scary. The elevator doesn't give you much confidence either. It's very clunky and jerks quite hard when you stop. The electronic numbering doesnt always indicate the floor you are actually on (it said 3 when I had arrived at floor 5, but only sometimes) so from the point of view of a person who has been stuck in an elevator before, that's a bit of a concern.

The rooms themselves feature soft, comfortable beds, a table and chairs, and bathtubs not just showers, as some 3-stars do. As I was on the 5th floor, I had a fairly pretty view of portions of the city and hillside between the surrounding buildings. Lower levels may not have such a view. The hotel, however, is very well-located. The Prado in Cochabamba is a wide, 4-lane thoroughfare with lots of banks, shops and restaurants to visit.

The hotel personnel were very friendly, even though when our party of 4 arrived at the hotel the reservation, which had been made through a company two weeks in advance, could not be found. The hotel did have rooms available at the time and was able to accommodate us however, what would they have done if they had not?

The hotel also has a fairly nice, small lobby and a fairly large breakfast room. Breakfast is included in the price and features a nice combination of scrambled eggs, fresh fruit and fruit salad, various types of bread and rolls, yoghurt, cereal, coffees, teas and juices. It also has a conference room that can accommodate about 80 people.

The menu is fairly large and you can order breakfast, lunch or dinner until about 9 pm either in the dining room, or room service. After that you can't even get anything, not even water. However, the food is good. I ordered "silpanchos" a Bolivian specialty and the platter (can't call it just a plate) that I received was very big and plentiful (Cochabambinos are known for serving very large portions).

The hotel also offers laundry service, garage parking, safe deposit boxes, and wake up service. The "business center" consists of a single computer on a bar-like counter in the reception area. However, there is WIFI throughout the hotel.

Overall my experience at the Hotel Regina was not completely negative or unpleasant despite the initial worry it caused our party to find out they had no reservation for us, two hours prior to a very important meeting we had scheduled in the conference room of the same hotel (for which, strangely, the reservation did exist).

Join in and write your own page! It's easy to do. How? Simply click here to return to Hotel Review.