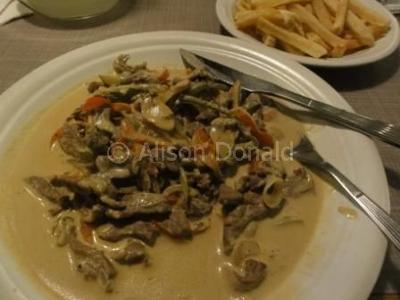 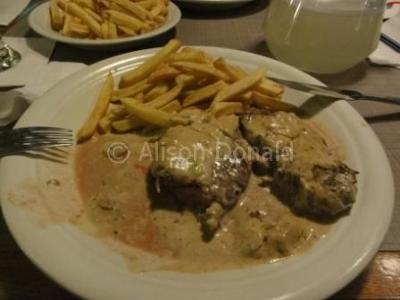 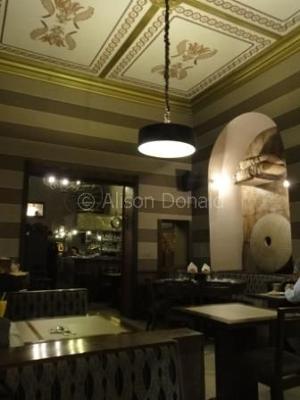 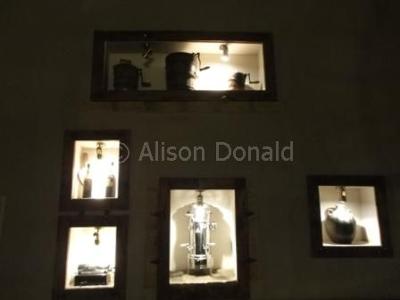 When you think about it, GattoPardo is the kind of place that could be appalling. It is on a main plaza (a known spot for so-so establishments that trade on their location), open from early morning until late and night and has a huge menu and drinks list.


So in my book it deserves even more credit for doing things really well.

There are several very distinct areas you can sit in: the outside pavement tables, the nook tables in the low-ceiling wing at the back of the restaurant, the private dining room and the area with high ceilings to the right of the bar and the entrance when you walk in.
The tables towards the back of the restaurant were often full of people on laptops, using the fast wifi to make Skype calls.
We had afternoon coffee and croissants (sorry, media lunas) at an outside table and later the same evening returned to eat in the large main dining area.

At the recommendation of a fellow expat we bumped into, we both had steak (fillet mignon and a stroganoff). Each dish was 44Bs (just over US$6) including chips or rice. Both dishes were absolutely delicious with meltingly tender beef and once we started eating we couldn’t stop. Until it was all finished and then we couldn’t move.

To drink we had a pitcher of lemonade which we thought tasted a bit odd until I realised later that it tasted of European-style lemons instead of the fruits they typically use to make it in Bolivia.

Gattopardo is on the main plaza, stylishly decorated and with well-priced and delicious food. Who’d have thought it?