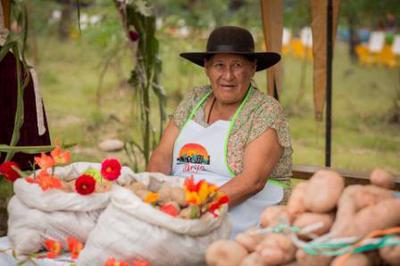 One of the women with her prize winning potatoes

A Bolivian with his potatoes 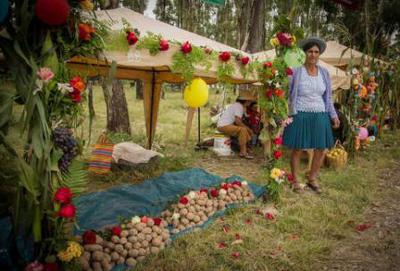 The traditional set up they used when decorating their stands 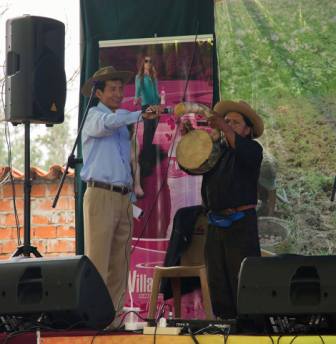 The stage where they had music throughout the day

January 18, which fell on a Sunday this year - the Feria de La Papa (Potato Festival) was held in a local small town near Tarija - San Andres. I am not sure if it is always on the 18th or always on a certain Sunday, but that was the date for this year's event (2015).


I have friends with family in the town, so we went to the Feria de la Papa together. I was told earlier in the week by a taxi driver that I had to make it to this Feria, it was huge and that my kids would enjoy it, but I would probably want to leave after 3 or 4. He said after that time it becomes more of a drunk fest. Found out by my friends that while drinking is commonplace (so commonplace the other day I had a scary taxi ride and I started thinking the guy might be drunk, as we approached my house he tried handing me his small bottle of alcohol, those little clear ones that smell like rubbing alcohol, and offered me a drink!) - this particular festival is well known for drinking.

When driving up to the town, I was surprised to see how incredibly packed it was. For about a mile, or little over a kilometer, there was a slow moving line of traffic being directed into the parking areas. There were people everywhere and all types of vendors. From the typical vendors with small toys, to chocolate covered fruit, to soft ice cream, hats, the whole nine yards. It looked like everyone made it out with their carts to the event. So the potatoes were the main attraction. There were some pretty big ones out there and prizes for the competition for having the best and biggest potatoes, I imagine.

There was a huge kids' play area with the biggest bounce house I have seen in my whole life. It was one with the giant slide, plus there were all the other typical toys for kids to play on, many trampolines and those merry-go-rounds made out of old power wheels and cozy coupes, walkers, etc. (I always look back in the US how many power wheels and ride on cars and baby things we had, we could have made one of those at the house). We avoided that scene, which is probably a good idea as it would have been hard to get my daughter out of there once she started playing.

We headed to a tent run by my friend's aunt for lunch. They were serving typical dishes - costillas (ribs) I might have spelled that wrong, picante de pollo (awesome typical chicken dish with a red sauce), sopa de arroz (rice soup) and chancho (pork chops). I went with the picante as chicken is usually my choice. It was excellent.

We grabbed some photos of the kids enjoying the park and a soft ice cream cone as we left (I find it interesting that soft ice cream is now a special treat as you don't see it often in Tarija whereas in the US - hard scoop ice cream was always my favorite and preferred over soft any day). The weather was beautiful that day as it had been raining all week and we were worried about rain, but had nothing but clear beautiful skies and perfectly warm temperatures. My friend and I dressed our little girls in the traditional chapaquita outfit for the festival and our little gringitas had so much attention it wasn't even funny. They did look adorable.

Couldn't have played out any better, my daughter was on her best behavior and everything was so perfect. It was a great day and we were blessed to spend it with such wonderful friends, friends I have become so close with they feel like family.

As we left, the traffic was even more backed up. The drinking must have been getting underway around 4 in the afternoon when we left.

Photo credit: The above photos belong to the Autonomous Municipal Government of Tarija. Visit their Facebook page to see more.