Expat Stories: Moved from USA to Cochabamba, Bolivia (Part 2 of 2) 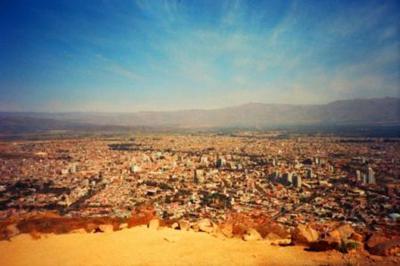 14. Is there anything about Bolivia that turned out to be very unexpected to you?


Not really, thanks to my girlfriend I had about as good an understanding as you could have for someone who never lived here before. Actually, the most surprising thing for me so far is probably that a) I have an office job, and b) I really really like it. I had worked in a handful of offices in the US before coming here, and without exception they were boring and depressing. I dreaded going to work. Here, the people I work with are very serious about their jobs and work hard, but at the same time they are really laid back and friendly, and there is this chilled-out kind of aspect in the office every day that has really taken me by surprise in the best possible way. Most of the other big differences between life here and back in the US I had asked or been told about before coming, so even if they are bothersome, at least I knew about them in advance, like how driving etiquette is different or getting charged the gringo rate in taxis and whatnot.

15. What special skills or attitudes do you think a person or family needs in order to ensure their stay in Bolivia is enjoyable/successful?

I suppose you have to be able to adapt pretty well if you’re going to go live in a different country, and you have to assume some stuff is really going to bug you and that YOU will be the one that has to change or learn to live with those things. I had spoken with expat friends who sometimes talked about a kind of delayed-onset culture shock and not realizing how much they missed home until they’d been gone a long while and the honeymoon effect wore off. I worried an awful lot about this before I came here and to a point still do, but honestly it’s never been a real issue (yet?...). Aside from that, just in general I think how positive of a person you are has a lot to do with how much you enjoy/succeed in life, no matter where you are. You need tolerance, but also should have a strong idea of what you want. Curiosity helps I guess. Also I’ve found you need connections here to really thrive (legal, business, social – at some point no matter your ingenuity or drive, you will need someone to hook you up), and sometimes a lot of patience. Also, if you’re a vegetarian you are probably in for a struggle.

16. Is there any reason you would NOT recommend Bolivia as a place to live, work or retire?

Not really, but that doesn’t mean I would recommend it to everyone. I’m annoyed as hell about some aspects of life here, but you’ll always have that. And for me at least it takes some time to figure out what those things are, I can’t know until I’m dealing with it every day for awhile. There is enough information out there I think for most people to figure out why all the expats in Bolivia are living in Bolivia, and that will inform your decision

17. What is the most negative aspect about living in Bolivia in your opinion?

Sexism, to a certain extent other forms of bigotry that sometimes seem so well-accepted. For example, if I go to have lunch with my girlfriend and her family I am strongly discouraged from helping to set the table or bring out a plate of food for someone. I’ve tried, sometimes insisted, to lend a hand, and it can make for a pretty awkward situation. There are discriminatory attitudes that are right out there in the open, and it’s a little disconcerting to me to think I might be getting used to them. Of course it’s not everyone, and it’s not a problem specific to Bolivia, but it threw me for a loop when I got here.

18. What are some of the most positive aspects about living in Bolivia in your opinion?

Food, cost of living, random holidays, nice people will blow you away with their acts of kindness. And here in Cochabamba, it’s always 70 and sunny – even at night.

19. Have you faced any unexpected difficulties while living here? Were you able to overcome those obstacles? Are they serious enough to cause you to want to leave?

Unexpected, no. The worst so far has been the disorganized bureaucracy and the people who will try to take advantage of you. I’ll admit I was pretty street-naïve when I got here and still sort of am that way, but if you can learn to not dwell on that stuff it’s not too hard to navigate. For me I think I went from being a little gullible and confused to being enraged at times to finally just accepting the negatives as the inevitable nuisances of life that everybody everywhere has to deal with. There’s more than enough positive to outweigh these negatives, though, and they were never so unbearable that I wanted to leave.

20. If your children moved overseas with you, how did you prepare them for the differences in lifestyle or culture shock?

21. For future potential expatriates who are considering living in Bolivia, what advice would you give them (how to prepare, what to bring or not bring, etc.)

First off, scour the Internet before you pack, obviously. Also, make friends with someone who runs an import/export business between the United States and Bolivia. There are reliable international shipping companies, but the rates will change your idea of how important it is to really have everything you want when you want it. Once you’re here long enough, eventually you’ll probably know someone who knows someone who regularly travels between Bolivia and the US and if you really need something you’ll have a better option that way. Informal business arrangements have been another hard thing to get used to, but often that’s just the way it is. You might get burned a couple times but it’s part of the process of making connections and finding people you can trust.

22. What are some of the things that were most difficult for you to accept or adjust to in Bolivia?

Language barrier at first, the people trying to screw you over are as nice as the people who want to help you. Soooo much meat. Paying an arm and a leg for Internet service that would have sucked in 1995. Crummy streets and sidewalks that take the fun out of driving and walking.

23. Prior to moving here, what aspects of living in Bolivia would you have liked to know more about or have more assistance with? Is there anything anyone could have done, or informed you about that would have made your choice to move to Bolivia, the relocation process itself, or your initial adjustment period easier, less stressful, less frightening?

I suppose I’m accustomed to having complete up-to-date information available on government websites, and this caused some major headaches for me when dealing with the visa paperwork, both when I was still in the US and also getting residency once I arrived. It is virtually impossible to complete all the necessary steps for becoming a legal resident within the 30-day timeframe. Honestly there were times when I really had no idea if I would be granted a visa and be able to stay and start my life here. According to the information I had, it seemed that if migration or whatever other government office were to follow the letter of the law, I would be forced to leave and have to start over. Looking back, this was a little bit paranoid on my part, and I think as long as you do your homework you will not be barred from entry or be forced to exit the country and come back with proper documentation. BUT it will end up costing some money, be it in the form of late fees, last-minute notarizations, or something else you hadn’t anticipated. Requirements are always changing too. In my case, I have three different slips of paper listing requirements for the Interpol background check that I obtained in three consecutive visits in the span of about two weeks. It just felt absurd at times, like I was just getting worked for more and more cash. And most of the expenses were really not that much, what got to me more was the frustration at having felt sure that I finally got everything done only to be told by some weary apathetic clerk that this or that signature was missing or their boss was out sick that day and I’d have to come back. So my recommendation would be to try hard to steel yourself against that and realize it will be worth it in the long run. I figured it’d be stressful and frightening becoming an expat, but I had no idea in what ways it would be.

24. Hindsight is 20/20. If you could go back in time to the months before you moved to Bolivia, is there were anything you would do differently to prepare for living in Bolivia?

Talk to as many people as I can as often as possible and press for information. Have some connection with an international courier. Say goodbye better to a few people, keep in the moment and enjoy it all.

25. Just for statistical purposes, had you heard of BoliviaBella.com or Expat Services prior to moving to Bolivia?

My girlfriend was my primary source of information on how to make the move, but BoliviaBella.com was a close second. There were some really useful user comments about things to watch out for, and some really helpful advice and anecdotes about teaching English and the education system. No one’s experience is quite the same, and to see that reflected in all the comments was beneficial as well as frustrating. It might have helped to have some kind of voting system for comments in the forums. Also, overall I remember it being just so much text, and thinking I would have loved to see something like video posts or pictures of anything having to do with regular life in Cochabamba, the good stuff and the bad. It might have made things seem a bit more familiar once I got there.

Join in and write your own page! It's easy to do. How? Simply click here to return to Expat Stories.