Duck Past Where the Fish Are 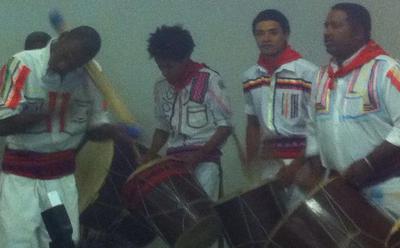 Afro-Bolivian band and dancers performing at the event celebrating International Mother Language Day at the Plurinational Institute of Language and Cultures in Santa Cruz. 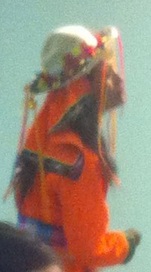 I look over Urubo from my high-rise condo every day, and millions of people each month head past signs that proclaim the new developments around Santa Cruz: Urubo Country Club, Colinas de Urubo, Jardines de Urubo, Urubo Golf, Mirador de Urubo, Urubo this, Urubo that. The city’s highest tower, the gleaming La Riviera, has its most expensive new condos facing Urubo, just over the river Pirai.


Duck. Urubo means duck, and Pirai means ”water where the fish are.” Both are words in Guaraní, one of Bolivia’s 38 official languages. Words that are pronounced accented on the last syllable are likely derived from, or assimilated Guaraní. Chiriguano is the language of the Chiriguano peoples of the Chaco and Amazon regions.

I learned this at Tejiendo la Pluraridad, Weaving Plurality, a celebration of International Mother Language Day held at the Plurinational Institute for the Study of Languages and Cultures, IPRLC by its Spanish acronym, in Santa Cruz de la Sierra this past February 20.

There are over two million Quechua speakers in Bolivia; over one million people speak Aymara just under one million speak Guaraní. But Bolivia has 38 official languages, 36 indigenous plus the Afro-Bolivian language and Spanish. Some ten of these languages have less than one-hundred living speakers, one has two, at least two have none.

Of course, the sheer number of official languages is hugely impractical. Proper implementation of officialdom would mean every official act would need 37 translators, the Bolivian Code would have to be translated into every language, and all those languages would be spoken in its schools, courts of law and law enforcement agencies. You know it doesn’t happen. Of course, the number of languages is unwieldy, and implementing all of them into the fabric of Bolivian life would make all life highly inefficient. But western-style efficiency is not what Bolivia seeks.

In fact, as you might have noticed, Bolivia is a Plurinational state. The concept of plurinationalism is at the center of a seismic cultural revolution and is the core of a new iteration of Bolivia as the epicenter of Latin American decolonization, the peaceful undoing of colonial past, the dismantling of a Republican country and the making of a plurinational state, one that respects the cultures, histories and languages of its original peoples, what President Evo Morales calls the sturdy moral reservoir of humanity. Morales is referring to the sets of values, emotions, worldview and lifestyle that have made it possible for these cultures to survive attacks by the colonizing Spanish as well as hundreds of years of attempts by various governments and economic interests to dictate how they should live. They have survived in spite of all of that, Bolivia now recognizes, and the wisdom of these peoples, their culture and the language in which these were framed are now granted special rights until Bolivia’s Constitution.

Bolivia aims to create a country that is culturally introspective, intercultural, plurilinguistic and based on dialog and respect among its many cultures. To that end, the state employs sociologists, cultural anthropologists and linguists charged with identifying, archiving and protecting these cultures and languages to preserve the human wisdom they embody and to allow new Bolivians to draw upon that cultural heritage, to be proud of their indigenous past yet aware of the diversity of backgrounds that make the new society, and to form a worldview that both respects these values and incorporates them into a world dominated by technology and scientific developments.

If well Bolivia does not seek efficiency in this field, it does seek to change the paradigm about life, one that redefines efficiency as a good life, well-lived, a life based on an Andean and Bolivian reflection on what it means to be human, what it means to be a citizen of this Earth, and what rights and responsibilities this entails. This new Bolivian soul rejects consumerism, instead drawing upon that cultural treasure chest to point out that it is possible to be happy with what you have, just as those original peoples, some even today isolated from the mainstream economic currents of the world, have learned to have happy and fulfilling lives in a rather Bolivian quality that achieves maximum good life with minimum impact on its ancient values and the things that are important such as family, the land we live on, and the cultural identities that make people who they are. Like the greatest social engineering projects of great societies such busing in the United States, the aim is to achieve a good life without social, economic or racial prejudices, a life based on pride of the past and firmly standing on it to build a new future.

How are they doing this?

Language, they have identified, plays an important role in how thoughts are framed and how a culture comes together, how its value system and cosmovision -- its worldview -- draw upon an ancient cultural DNA that is transmitted in the emotions one feels at hearing a specific word at the images conveyed when those words are strung together in a particular way. Language and the history of values, emotions and worldview are essential in the Bolivian model of the good life that is possible when one rejects the idea that buying the next item is all one needs to be happier.

IPELC projects itself as product of the distilled thoughts, profound musings, values and philosophies of the country’s nations plus original indigenous and Afro-Bolivian peoples, it is the lead organization charged with the rescue, revitalization, normalization and development of the linguistic and cultural diversity and multilingualism of Bolivia and its incorporation into education, justice, health and other areas.

Linguist and passionate conservationist Rocena Rodriguez works under the aegis of the Bolivian Ministry of Education establishing the norms for research, archiving, rescue, teaching, use and spread of these languages, cultures and worldvisions to sustain, project and preserve the make-up the plurinational state of Bolivia.

Its rich linguistic heritage has given the whole of Bolivia a new way of thinking and of being, the “Vivir bien” --“Suma Qamaña,” “Sumaq Kawsay,” “Ivi Marae” -- or Living well, as the new philosophy of life of the new plurinational state. It is a transformation that is well on its way thanks to the efforts of the leadership of IPELC, Rodriguez and people like her, as spearheaded by Bolivia’s indigenous President Morales. It was apparent from the renewed pride and cultural interest at the event that this effort on languages is strengthening the identities of peoples once forcibly diluted and assimilated into a culture not their own. Language, they said, is identity, a vital link to the history and ancestors, their way of thinking, of being, and of understanding the world.

My personal understanding of the Urubo I see out my window has already changed, Duck past the water where the fish are...