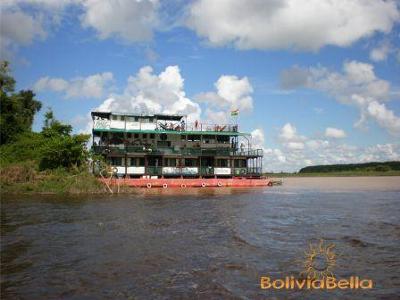 Beni is the second largest of Bolivia's nine departments and covers the Northeastern-most section of the country. Because of its proximity to the Amazon Rainforest and river basin (every river in Beni is a tributary of the Amazon) it has a tropical climate and is hot and humid throughout most of the year.

Beni receives ample amounts of precipitation during about 9 months of the year (October through May) and especially during the summer rainy season (December through March) when Beni regularly experiences serious flooding.

Beni's capital city, Trinidad, sits at just 237 meters above sea level. In the city of Trinidad, the average temperature during the winter (June through August, also the dry season) is 68ºF (20ºC) and between 75ºF and 85ºF (24ºC and 27ºC) during the rest of the year.

However, Trinidad is located in the southern half of Beni. In cities and towns farther north (such as Guayaramerín) average temperatures can be 10-15ºF (up to 7ºC) above that.

Return to our Climate Home Page for more details about the seasons, weather and climate in Beni, Bolivia.