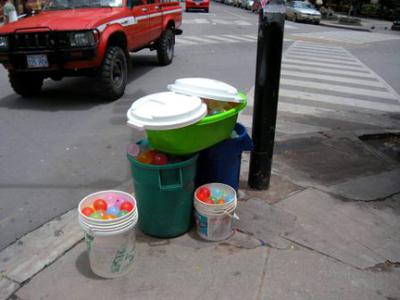 Preparing for the big water fight

It is time for Carnival in Sucre and I was expecting a weekend or so but it starts about three weeks before Lent and it is throughout all of Bolivia. To describe it would be to combine Marti Gras, Halloween, St Patricks Day, and the Forth of July with a Bolivian cultural spin and parade after parade after parade.


It is the last day today and fire crackers have been going off since dawn. Yesterday, Monday seemed to be the biggest day of celebration but it is hard to tell. All night the blare of brass bands continued late into the evening with the main square the focus point but literally every street in the city had groups of dancers and bands and what would seem to not have much organization or official street closures was totally in unison as cars would wait or drive slowly past a group. People would appear on their balconies to watch or bombard water balloons or both.

EVERYBODY is involved, the entire city, even if you don't want to, and I mean from toddlers to senior citizens. First the large groups with very ornate and artistic costumes and masks down to the neighborhood group displays an enthusiasm and a joy in this festivity. I watched a school group of about 800 take to a street and was glad to see such comradery as they sang an danced.

Each band has cymbals, drums, tubas, and horns and all play the same songs....from the 8/10 piece to the large 20/30 piece bands, so there are a couple thousand horns blaring for hours all over the city. I sat and imagined all the practice they must put in all year, and then again the hundreds of hours making uniforms and costumes some of which are purely artistic all displaying bright colors. Typically a group would choreograph a serpentine line in front of the band and then the obvious steps and stunts all in unison.

A huge part of Carnival are the hundreds of thousands of water balloons or "globos" being flung at indiscriminant targets. I watched as throngs of families carrying plastic bags filled with "globos' and the kids with water canons slung over their little shoulders ready for the action.

There is a depth to "Carnival" that surpasses most celebrations and parades, a cultural pride extended with such fervor and enthusiasm throughout the entire community as one is not but a spectator but a participant.....