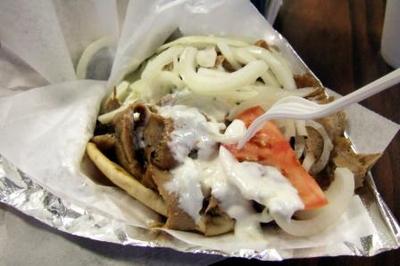 La Estacion is a great find for lovers of Greek gyros. We love gyros and they're almost impossible to find in Bolivia so we were overjoyed to find this Tarija restaurant almost right on the corner of Plazuela Sucre.


Unfortunately, we found this restaurant late at night just after we inaugurated Tarija as a new Earth Hour city. It was late, it was cold, and the camera battery was dead, so the photo above is just to whet your appetite.

We popped in just as they were about to close but the cook took pity on us (maybe it was the shivering, maybe it was the look of sheer joy at finding one of our favorite foods) and made us some delicious hot gyros and wrapped them in tin foil for us to take home and eat later. For just $2 dollars you get a big wrapped gyros and a soda.

La Estacion is a small restaurant that you might miss if you don't stray from the plaza itself. It's not actually right on the corner, but down about 10 meters. You'll find it if you cross the street from Thai Kaffe, walk down the sidewalk a little and look for their sign which isn't really a sign - it's a post with a stop light.

This place gets really really full when teenagers are out at night, but since gyros are pretty easy and fast to make, don't be put off by the long lines. It won't be long before it's your turn and its really worth it. For more places to eat and restaurants in Tarija click on the 'Food' link below.
Tarija Home   Tours   Forum   Hotels   Photos   Maps   Info   Food