Bolivia has preserved more original Spanish colonial era music manuscripts than any other country in the Americas. 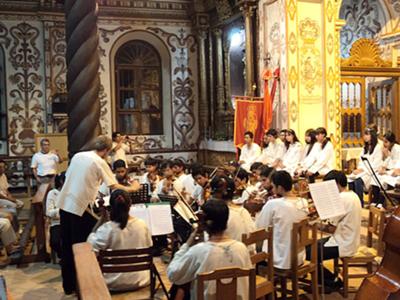 Bolivia has preserved more original Spanish colonial era music manuscripts than any other country in the Americas. They are a testimony to a great musical culture that arose centuries ago and has been partially preserved to this date. The most original of the treasures preserved as part of this legacy are the hand-scripted musical documents found in the ancient reductions, towns founded primarily by the Jesuits, but also by Franciscan priests, in Eastern Bolivia. The musical manuscripts, along with entire towns and their temples, chapels built in the 18th century, musical instrument workshops, and even the work of the copyists, who are responsible for preserving the musical repertoire and music schools and organizing worship services in the local communities, have been preserved. This is how the idea of organizing a music festival in honor of centuries past, specifically the Renaissance and Baroque music found in the archives of Bolivia and other countries in the Americas came about.


APAC, Asociación pro Arte y Cultura, a group of people organized by Marcelo Araúz Lavadenz (founder of the “Misiones de Chiquitos” American Renaissance and Baroque Music Festival) was established in 1996 to recover the music stored in the archives and to reintroduce it on Bolivian and global stages and as part of the liturgy or the Church, the original context into which this music was born. The institution also proposed creating choirs and orchestras in the mission towns and urban areas of Eastern Bolivia, much in the same way musical ensembles were created by the missionaries of the 18th Century. Therefore, while creating this festival, APAC simultaneously began a vigorous academic training program for musicians, beginning in Urubichá and extending to other areas of the country.

In Bolivia the music festivals primarily focus on restoring the mission music of Piotr Nawrot, and it is given to both national and foreign musicians to play. It was in this context that the idea of Bolivian musicians and their foreign peers co-producing this music was born. Fusing the beauty of the baroque mission music with the talents of local musicians and the abilities of foreign musicians and directors produced very unique and attractive results. To achieve this, APAC sought out partners for this project. The Prince Claus Fund for Culture and Development of the Netherlands has played a central role in funding this project. Piotr Nawrot selected the repertoire, directors and musical ensembles that would accompany the Bolivian choirs.

Within the framework of the V “Misiones de Chiquitos” American Baroque and Renaissance Music Festival in 2004, APAC conceived and put together a co-production between the English group Florilegium and 4 Bolivian soloists, financed by the Prince Claus Fund. APAC held national auditions to select musicians for the project. Musicologist, Dr. Piotr Nawrot led the musicological and conceptual portion of this project and suggested Ashley Solomon act as guest director. The first compact disc was also recorded at this time, in the original environment in which this mission baroque music was composed: the churches of the Misiones de Chiquitos. The results of this APAC initiative were extensive. In addition to playing in Bolivia, Florilegium and the Bolivian Soloists gave presentations in Amsterdam, Vienna and London in January of 2005.

Composition of the baroque repertoire in Bolivia led to the creation of a choir. To this end, Piotr Nawrot and APAC decided, in 2005, to fund a choir, which would later become known as the Arakaendar Choir, to interpret the ancient music of Bolivia’s musical archives, specifically the baroque repertoire of the missions. Choir members were selected during auditions held throughout the country. The choir is directed by guest directors, the first of whom was Ashley Solomon, who directed most of the programs presented by Arakaendar since its creation.

The Arakaendar Choir was first launched during the VI “Misiones de Chiquitos” American Baroque and Renaissance Music Festival in April of 2006. In addition to giving four concerts in Bolivia, the choir and Florilegium recorded a new compact disc inside the church of Concepción, titled Bolivian Baroque II. This CD was presented to the public in 2007 and was nominated for the 2008 BBC Music Magazine Aware in the “best choral recording of 2007” category. The Arakaendar project was also covered in a documentary by CBS’ “60 Minutes” which was transmitted throughout the United States on Easter Sunday of 2007.

In February 2008, Arakaendar made its first European tour which included a series of concerts in several of the most important concert halls of the Netherlands. Prior to traveling, a Dutch television crew filmed the last few concerts in Bolivia. This documentary, as well as that of “60 Minutes”, was transmitted on Dutch television 5 times a day during their tour. In the United Kingdom, the choir gave a concert at London’s Royal College of Music, which was transmitted live during BBC Radio 3’s “In Tune” program. As part of the tour, the choir, along with Ashley Solomon and Florilegium recorded a CD titled Bolivian Baroque III at the Waalse Kerk church in Amsterdam, which was presented in January of 2009.

During the 2010 music festival, Arakaendar participated in three programs: the first, directed by Daniela Dolci with Musica Fiorita; the second, directed by Alejandro Reyes along with two ensembles from Chile and Poland, Syntagma Musicum, Les Carillons and the UAM Choir; and the third, under principle director, Ashley Solomon.

In 2011 APAC expanded the Arakaendar Project by founding an orchestra with the same name. In addition, APAC asked Ashley Solomon to direct this project and invited Chilean violinist Raúl Orellana to assist. The Prince Claus Fund provided the necessary funds to purchase instruments in response to APAC’s request.

In 2012 the choir traveled to Europe. Thanks to efforts by Ashley Solomon, the Arakaendar choir was invited to participate in several prestigious festivals in the United Kingdom: the Spitalfields Summer Music Festival (London), the St. Magnus International Festival (Kirkwall), the Cheltenham Festivals (Cheltenham), the York Early Music Festival (York), and the Beaminster Festival (Beaminster). During this tour Arakaendar also gave concerts in Spain in the cities of Tudela, Pamplona, Dueñas, Villoldo and Valladolid.

Bolivia is also home to numerous music collections in urban centers, such as those of the Franciscan missions and other religious orders. The Arakaendar choir’s mission is to interpret all of this music, from the plainsong melodies stored in the archives of Sucre and Tarixa to the music of the Guarayos, Guaraní and other ethnic groups that safeguarded the musical documents of times past.

Over a period of 16 years, the number of visitors to these festivals has quadrupled and the number of musicians, actors and artists has tripled. APAC's efforts have been deserving of numerous national and international awards.

Join in and write your own page! It's easy to do. How? Simply click here to return to Jesuit Missions.