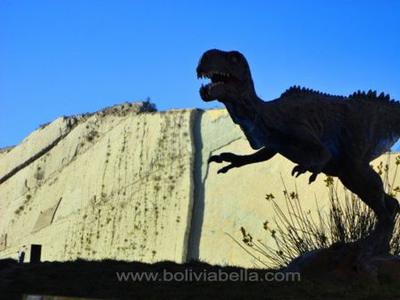 
Here's a short summary of several articles that recently made the news about this.

The dinosaurs that left the two new footprints will be named after Sucre (Bolivia's capital city) and Cal Orko (the nearby area where the prints were found). This new discovery, added with the already known footprints, makes over 10,000 footprints.

The two unknown species were predicted to be of the ankylosaur and therapod species and will be named "Calorko saurupis sucrense" and "Sucre saurupis bolivienses" according to the La Razon newspaper. These footprints belong to hundreds of dinosaur species that lived roughly 65 million years ago. Now that's a spectacular accomplishment for Bolivia indeed.

Here's a slideshow of some pictures my mom and I took at Cal Orko:

This discovery was made by Swiss scientist Cristian Meyer while working in Bolivia. Bolivia is going to ask the United Nations to name this site a Natural Heritage of Humanity site. Maybe that way people will want to protect it more.

So what do you guys think about us having the biggest collection of dinosaur footprints in the world? If you could name the two new dinosaurs discovered what would you name them?