Be careful on trips to Salar de Uyuni 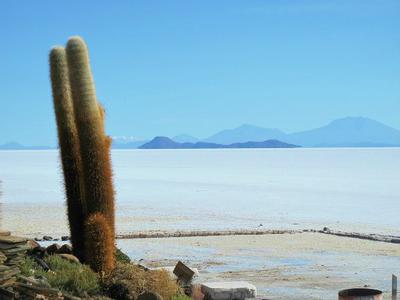 Please read carefully if you are considering a trip to Salar De Uyuni. We started our trip on Salar De Uyuni on Sunday 13th July 2008, a 3 day tour on the salt plains and made it about halfway across the first day when a jeep passed us going a little faster carrying 1 driver and 6 tourists in the back with ruck sacks, gas cylinder, food and stove on top of roof rack just like our jeep. Their jeep lost control and started skidding about 30mtrs away from us and as it was top heavy started flipping over and over.


Bags, food, roof rack and HUMAN BODIES were flying everywhere. We watched it in slow motion. We were the first jeep on the scene and when we got out of our jeep, we saw a man climbing out of the back of the overturned jeep, with a gash on the back of his head. He walked with a limp but seemed alright. Then we turned around and there were bodies everywhere, people wailing everywhere. So my partner and I went to the nearest person who seemed critical. Turned out to be the driver who at that time had a weak pulse, my partner gave him breath of life while I did the compressions on his chest. He had a large open wound on his head and was dying. We continued with CPR but couldn't keep him alive, he died within a few minutes. Another 2 people were found dead at back of jeep, a Belgian man and French woman- they were cold and grey in pallor when we got to them and it appeared that they had died instantly on impact.

So there were 4 others alive but in a pretty bad way. We looked after a Belgian girl who had severe facial lacerations and extensive injuries to her knee and hands. She's 27 and was married to the dead Belgian man.

The scene was chaotic, luckily enough other jeeps stopped and there was 2 Uruguyan doctors travelling on board who more or less started to take some kind of control of the situation. Telling us what we could do for the 4 injured survivors which was basically to try and control their bleeding, keep them warm and comfort them.

There was little or almost no assistance from the Bolivian drivers/guides who stood back and mostly observed the situation. The situation was entirely controlled and dealt with by the backpackers. None of the jeeps that stopped (ie all the tour companies collectively) had a radio transmitter/satellite phone to make contact with emergency services. Luckily a passing German tourist in his mobile home had a satellite phone which we believe was used to call for an ambulance.

Almost 3 hrs passed and no ambulance came. So the doctors on the scene made a decision that the four survivors had to get to hospital straight away. We assisted to get the 4 injured survivors into 2 separate jeeps (that came from Uyuni we think) and they were taken to hospital. Unfortunately one of the French women died en route to hospital, she had internal injuries, time most likely killed her and not receiving any pain relief within that timeframe made it a more painful death for her than it should have been.

Luckily the Japanese guy and German guy suffered minor injuries along with major shock obviously, however the Belgian girl has since been transferred to La Paz hospital, where she will most likely undergo facial surgery for her facial wounds.

Life is so cheap here, the guides gave no help and were uninterested and even wanted us to continue with the tour. We are so angry about the chain of events which led to this situation and many aspects of how it was dealt with. We feel a strong need to highlight these to you:

Firstly all jeeps had no seatbelts which was probably the biggest killer here as 6 people came out the windows of the jeep and of them 4 died while the least injured person walked out of the jeep.

Secondly the other jeep was definitely going a bit faster than ours, and I'm told by one of the survivors that the driver ( who we believe was actually a mechanic and not a tour driver) was asked to slow down by the 2 dead French ladies, instead he did a few zig zags as if it was a joke.

Thirdly the guides had no Radio Transmitters/Satellite phones to use in the event of an emergency.

Fourthly the guides stood around and did nothing to help control the situation.

Fifthly when an ambulance had been called (German tourists passed by with a satellite phone and called for an ambulance) it never came showing a complete lack of communication.

Sixthly the guides are obviously given no training in dealing with any first aid situation in fact they didn't even have a first aid kit/emergency blankets (in fact all the equipment used was supplied by backpackers on the scene).

Basically we would not be recommending this trip to anyone and unless they (all the tour groups collectively) clean up their act there's going to be more deaths. Keeping in mind that thirteen people died in May 2008 on the same trip this leads to a death toll of 17 in 2 months. THIS CAN NOT CONTINUE. Considering the general attitude to life in Bolivia and following discussions with our tour group when we returned back to Uyuni, our impression is that nothing will change.

Tours will continue to run on ill-equipped jeeps without seat belts, without emergency radio equipment, without first aid kits-emergency blankets and with guides/drivers who have no basic
leadership skills/training to cope with emergency situations.

And people will continue to die.

SOMETHING HAS TO BE DONE TO CHANGE THIS AND TOUR PROVIDERS/GUIDEBOOKS HAVE THE BIGGEST POWER AND INFLUENCE OVER THIS. WE URGE YOU TO NOT TAKE THIS LIGHTLY. WE WILL NEVER FORGET THE SCENE OF CARNAGE WE WITNESSED ON SUNDAY JULY 13TH 2008. IT WILL LIVE WITH US FOREVER BUT OUR SCARS ARE NOTHING COMPARED TO THOSE WHO SURVIVED THIS ACCIDENT ALONG WITH THE FAMILIES OF THOSE WHO PASSED AWAY THAT DAY.

WE ARE TELLING OUR STORY IN ORDER TO RAISE AWARENESS AMONGST TRAVELLERS OF THE SAFETY ISSUES AT STAKE HERE AND ALSO THAT IT WILL HOPEFULLY ENCOURAGE CHANGE WORKING ALONGSIDE THESE TOUR GROUP PROVIDERS, BEARING IN MIND ESPECIALLY THE POINTS WE HAVE RAISED WITH REGARDS TO LACK OF SEAT BELTS AND LACK OF EMERGENCY EQUIPMENT/ RADIOS.