10 Things You Didn't Know About the Uyuni Salt Desert 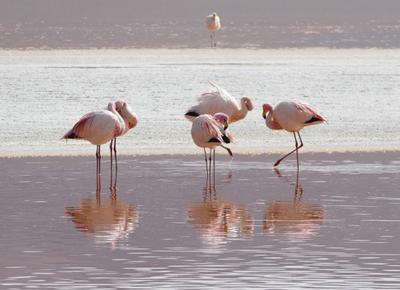 So we all think of deserts as sandy and hot. Well in Uyuni, Bolivia there's a desert covered in something you put on your food. Here is:


10 facts you didn't know about the Uyuni Salt desert:

1. The Uyuni Salt desert of Bolivia is the biggest salt desert in the world, at 10,582 square kilometers in size.

2. It is the breeding ground of several types of pink flamingos.

3. During the wet season it turns into a salt lake.

4. About 40,000 years ago it was a massive prehistoric lake. When it dried what was left were two smaller lakes, lake Poopó and Lake Uru Uru plus two salt deserts, the Coipasa salt desert and the Uyuni salt desert.

5. In the center the salt is over 10 meters thick.

6. In the dry season it's a flat desert of dry salt.

7. Uyuni is from Aymara language and means "pen" or "enclosure".

8. Uyuni is also the name of a town that leads into the salt desert.

9. Salar means "salt flat" in Spanish and so in Spanish is called el Salar de Uyuni.

10. The salt flat has hundreds of little pyramids of salt all over it because people dig up the salt to sell it and place it into little mounds for trucks to pick up later.

So that was el Salar de Uyuni (The Uyuni Salt Flats). Hope you enjoyed today's top 10. Can you guess how many POUNDS of salt are in the salt flats?